Whoosh! by author Ben Clanton and illustrator Don Tate is a 2018 Texas Bluebonnet Award Nominee.  It is a literary non-fiction picture book about inventor Lonnie Johnson (for librarians and teachers this is a double win, when looking for an engaging readaloud that meets the needs of curriculum!)

As I read Whoosh! I tried to turn my teacher brain off, but this engaging story has so many learning gems within that I was unable to, which led to writing this blogpost.  I have never written a post about how I teach in the library, because well, it doesn’t sound very exciting, but after sharing our experiences on Twitter, educators loved how we were using the book in the library and I decided to share the gems I exploited while sharing Lonnie Johnson’s story.

Third, fourth  and fifth grade lessons were geared towards our research model known as SOLE (Self Organized Learning Environment to learn more watch TED Talks by Sugata Mitra).  We were exploring how to merge our research with our thoughts and opinions to draw conclusions and come up with “Review Summary” based on Stephanie Harvey’s Comprehension Toolkit.

We started with the ending: students created a three column foldable based on our discussion of this anchor chart, setting the stage for what we expected to produce while, and after, reading Whoosh!

As we explored the cover we had a conversation about what our “Content” focus could be: the Super Soaker, Lonnie Johnson the inventor, the many inventions that would probably be mentioned in the story, or a hodgepodge of all three.   I shared this book in digital format, I wanted students to be able to read along with me, to enjoy the illustrations, and I wanted to be able to zoom in on text, and the Kindle book allowed me to do just that.

After the cover, we discussed the end papers, some students knew the illustrations were called “blueprints” and some inferred what the numbers all around the inventions on the blueprints might mean.

Don Tate’s illustrations are so warm and homey, it makes the reader feel like you are peaking into the life of your next door neighbor! My readers were loving and relating to them at the click of every spread, although there are hints of the times Lonnie Johnson grew up in, they weren’t so overwhelming that they might disconnect some readers who are disinterested when they notice that the story isn’t taking place in “their” time.

Learning Gem #1: Context and Picture Clues! They are there for the taking, in an engaging, well written story that doesn’t feel like an academic lesson when I asked students to use those skills.  If you’ve ever had to deal with standardized testing there’s this pesky, frankly irritating question “Which words help the reader understand the meaning of….”. Well, if you already know the meaning of the word being targeted, you’re thinking “Hello, I know this word, I didn’t need any help from other words, thank you very much!”  If you are a reader, you’re thinking “Dude, the whole paragraph is giving me clues to understand the meaning of the word.  Why are you asking me this question?”  Maybe you don’t have these thoughts when faced with these irritating questions but trust me kids do, and so do I! But, Chris Barton did such a beautiful job that we didn’t mind pretending we were being asked that question.

After having the “irritating question” conversation I described previously, I put on my best game show host voice and asked the pesky question “Which words helped you understand the meaning of…” for the following pages:

In this page: we used context clues to describe what an engineer does. (Seriously, what does an engineer do all day?  Chris Barton broke it down to the most organic definition.) Learning Gem #2: A test DOES NOT define  you or dictate your destiny! Lonnie’s Aptitude test came back with results that stated engineering was not for him! The man worked for NASA!

Learning Gem #3: In this page: we used context clues AND picture clues, as well as schema, and inferencing to understand what was going on in the 1960’s when Lonnie was in high school and won a Science Fair Competition being held at the University of Alabama.  The kids talked to each other and 3rd graders sometimes started by saying “separation”, which would trigger another’s memory of the word “segregation”.  This lead to a conversation of what it must have been like for Lonnie growing up, and talk about the better-known Civil Rights Movement leaders.  (Regretfully, only one student in fifth grade, of all 3rd, 4th, and 5th grade classes I shared this story with, knew that the struggle for equality was known as the Civil Rights Movement. Something I intend to rectify, now and in future lessons.)

Back to Learning Gem #1 (Context Clues): In this page: We used context clues to understand what “prototype” meant.  Some ideas that came up were “model”, “not good enough yet”, “the very first one”.

Learning Gem #4: This part of the story gave way to an excellent discussion of how Lonnie decided to see mistakes as opportunities rather than failures.

Back to Learning Gem #1 (Context Clues): The next page we used our context clues to figure out meaning, is the page where we learn Lonnie finally gets “investors”.  This is the page where at first you see board members repeatedly saying “No.” to Lonnie’s sales pitch and then you see Lonnie on the phone getting a “Yes.”

As we are having all these amazing conversations, if you look at the students in the pictures, they have their foldable and are adding notes for their “Content” and “My Thoughts” column.

Learning Gem #5: Lastly, the Author’s Note is just as priceless as the whole picture book.  It invites students to be like Lonnie, grab something and take it apart to understand how it works.  This will be next month’s lesson with 4th graders.  I am waiting on the tools I ordered, I have been saving up discarded home and school electronics to have a Deconstruction Makerspace, inspired by Lonnie’s curiosity and Chris Barton’s invitation.

Chris Barton also shares how he was inspired by what librarians shared with him at a luncheon.  The librarians had been at a workshop that asked them to draw a picture of a scientist and they mostly drew a version of Albert Einstein, working alone, looking a little deranged.  Before reading this part of the Author’s Note, I asked readers to visualize what a scientist looks like and share out.  Guess what?  They described him exactly like the librarians did to Mr. Barton.  This was a wake up call! Even our kids see scientists as something so far from the every day, why would they even consider this path?  I asked how many of them had thought “scientist” as we were learning about Lonnie, only 2 students out of approximately 200 I shared this story with, raised their hands.

When I read the last part of the Author’s Note, and readers learned that Mr. Barton had actually interviewed Lonnie Johnson, they were blown away! Can you guess why?  Because we are so used to only reading about those dearly departed…another wake up call!

Back to the original objective of this lesson, and blogpost: merging research with our thoughts and opinions.  After we finished reading I gave readers some time to read over their “Content” and “My Thoughts” and draw conclusions based on the two.  They shared out, some would only present their conclusion and I would ask probing questions of how they came up with why Lonnie Johnson was “kind”, “caring”, or a “fighter”.  I asked them to restate their conclusions with a “because” after it and we all agreed their conclusions were solid.  Here are some of their conclusions:

This lesson took between 2-3 weeks, library lessons are once a week, but it was worth every second because it was holistically enriching.  When April, National Poetry Month, rolled in we wrote Acrostic Poems in honor of Lonnie Johnson.  Here are some of the poems students wrote: 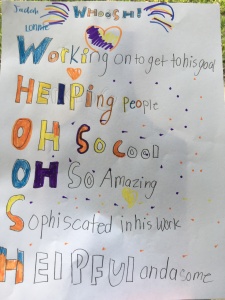 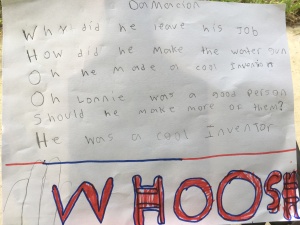 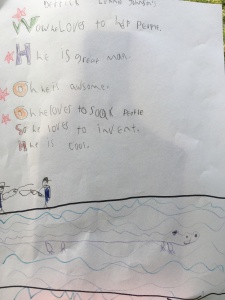 I hope you will share Lonnie Johnson’s  incredible story of creativity, perseverance, purpose, and innovation by reading Whoosh! Lonnie Johnson’s Super-Soaking Stream of Inventions with your readers!